The story goes that the hills at the new cemetery (where Dunipace used to be until circa 1860) were constructed to commemorate the signing of a peace treaty between the Romans and the Caledonian tribes.

The story says that these hills were called by their Latin name ‘Duni Pacis’  – hence the name Dunipace.

Elements in the 1892 Seal are the angel – carrying an olive branch signifying peace; a bridge – signifying the joining of the village of Denny with the village of Dunipace; Mount Vesuvius, anvil and hammer – representing the iron foundries of the Burgh; papyrus leaves – representing the paper making industries of the Burgh; the snakes or caduceus, a Roman symbol for truce, neutrality, and non-combatant status. Elements retained in the 1956 coat of arms are the angel (this time carrying palm branches for victory), River Carron and bridge.

The 1935 Silver Jubilee coin has the same images as the stained glass window.  We assume it was distributed in the tradition of golden jubilee celebrations in the 1920s in which, at the Gala Park festivities, children were given commemorative medals as keepsakes.  This aluminium coin was discovered in 2004 on Wellsfield Farm.  On the reverse side are images of King George and Queen Mary 1910 -1935.

The Denny & Dunipace Mills Oral History project evolved from the association of two community groups in Dunipace – the Denny & Dunipace Heritage Society and Community Green Initiative. The two groups formed an informal partnership in 2009 to refurbish the Heritage Rooms at Milton Row where they hold their mutual offices.

While painting and redecorating over a series of Sunday mornings in the spring of 2009 – talking over paint cans, ladders and scaffoldings, discussions began about having an oral history project, seeking funding for it…and the rest is history. 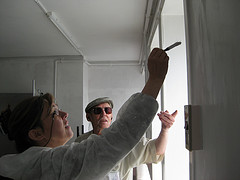 The two groups continue to work together for our common goals – preservation and enhancement of our community.

The Denny and Dunipace area has a rich industrial heritage, and the Heritage Society sees this past as a treasure which should not be lost, but actively promoted. To this end the Society seeks to promote activities which keep the memories of this heritage alive. These include:
• Publishing Heritage Trail leaflets highlighting sites of historical interest
• Show evenings, a recent one being on the hiding of the Stone of Destiny in Scotland, and the part Denny played in this.
• Arranging heritage trail walks for local schoolchildren
• Presentations to other local groups such as Probus on Heritage Subjects
• Providing the Heritage Rooms for the use of other local groups
• Working with other local groups to our mutual advantage
An example of the last item is the Oral History Project reflecting the way of life of workers in the local mills. The Society is working closely with Community Green Initiative to progress this project.

Community Green Initiative (CGI) is a volunteer group working to beautify and enhance Dunipace, Denny and district through litter clean ups, green awareness raising and community engagement. We stand against litter, fly tipping, dog fouling, invasive species and apathy. Originators of the Green Dog Walkers project, CGI stands for community spirit, team work and energetic solutions. We began work in 2006 and were officially constituted in June 2008. Our meetings are open to the public.