At that time there was a lot of ladies worked in the paper mill—when I started there were at least 100 women working in it. Every sheet of paper was checked one by one, by all these women. That was their job, day in, day out, checking the paper and they were happy doing that job as well. The music would be on, they’d be singing, working away and checking the sheet for dirt or anything like that. They had a special way of counting it, where they would fan up the paper and they counted it, 2 to 3 sheets at a time.

When you made cheque paper for the Bank of Scotland, you were only allowed one black dot in the square metre of paper. You can imagine if you got a black dot on the wrong place in a cheque, it could go from £10 to £100 or £100 to £10,000, if it was just in the wrong place. Very, very strict that paper.

Humour at the Mills

I was 33 year in the paper mill and I always thought I would see my time out in it…I would see my retirement in it but the sad reality is that it closed. But in the time I had great happy memories in it, a lot of sad memories as well. I would say probably the greatest was in the old mill, that was probably the best time I had. There was a lot of good guys, a lot of good people in it, as I say a lot of families. It was very family orientated; people connected to one another in it. One of the reasons a lot of people got jobs in it was somebody would speak up for you. If you were looking for employment your dad or your uncle would go speak to the managers, the bosses, and get you a job in the paper mill. So it was a big help. The sad thing is that it’s not there now.

Q. Did you have to tie your hair back?

A. If you worked in the cutter house you did because you had to crawl under the cutting machines, the big blades, big ripper blades, with a basket in front of you and you crawled underneath that and you picked up the shavings, the paper that had been cut, that had been trimmed. It was a big rotor—if you can imagine a lawnmower, well this was a huge big version. The cutters were that size but if you can imagine a lawn mower, rotating with blades, well that’s what that was like cutting the paper. You had to tie your hair back then, in case you got caught.

Carrongrove had 90% of the catalogues in the world. It was the only paper in the world that could guarantee the true colours. . . In the old days for envelopes, it was always transparent paper and people could read your letters through the envelope. So they put a ‘laid dandy’ on and it made it all squiggly so you couldn’t read it

Trivial Pursuit’, that was the order that saved Carrongrove from going down in 1980. It was a gold mine for Carrongrove, made here, shipped to Canada and sent all over the world. We made 20,000 ton a year just purely for Trivial Pursuit.

onopoly? That whole board game was made in our group. Carrongrove made the board, Westfield made the money and St Cutlers made the coloured bits. A group effort. Monopoly, that was another winner.

When you came home you had your dinner and you had to help in the house and do housework, washed the dishes. There wasn’t any nice fitted carpets that we have now a days. Floors were polish 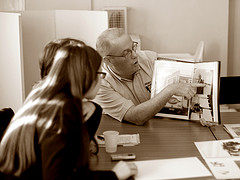 ed and done on Tuesdays and Thursdays, and brasses were cleaned. There were all different jobs in the house to do. . .But we did have a social life as well! You went dancing at the weekend—Friday night and Saturday night and sometimes on a Sunday, but you didn’t tell your mother you went on a Sunday!

We had a very active life. At these times we would think nothing of walking over to Bonnybridge and go into a café for an orange juice and walking back over again, that’s maybe about 2 and half miles.

No disrespect to the modern children, but I think we entertained ourselves better in these days. We didn’t have computers or anything like that to entertain us. . .

The man who we called ‘the gaffer’, the manager, he was quite a crabbit man and depending on the mood he was in if you came in a wee bit late he would say “You’re late, you just go back down the road” and you would say “Oh please just let me stay, I’ll not be late again” and he would say “No, just go”. And you would start going down the stairs and he would call you back and say “Okay you can wait, but if you’re late tomorrow your definitely down the road”. But I have been sent home because I was late two days in a row.

I didn’t find anything really that difficult to fix. I’m maybe being a wee bit big headed here. Some jobs were harder than others. There used to be a big notice up in the workshop ‘All difficulties are to be surmounted’ and I used to my best to adhere to that.

Up at Carron, well that was the offices and the man used to come over on a Thursday and get his table and all his money, Mr Mitchell was his name, in a tray ,and you got your wages. You didn’t get a cheque; it didn’t get paid into the bank, you got your money in an envelope, then we went home and had our dinners. Mummies didn’t work in these days, well not very many. Mummies were mummies and housewives and they had your dinner ready for you going home. But then you usually helped to do up the dishes. I just gave my money to my mum and I got my pocket money. You never had a bank account then. I never had a bank account, never. I never knew what it was like inside of a bank because it was only business men that went into the bank. It was saving stamps we got.

We found in our foundry, it was a right family business as I said and most of the men who worked in the foundry worked there from they left the school until they retired. A lot of factories, people start and they’ll change jobs, and change jobs and change jobs but these chaps didn’t. They mostly worked from when they left the school probably at 15 till they retired at 65. In fact some worked on till they were 70. We had great guys in the factory and we worked as a team which is very important. Say if something goes wrong in the foundry, say there was fault in the furnace and it breaks down—or what could happen is you could get a leak in the furnace where there was metal spillage and everybody would start running and help and get it cleared up. So it was very important that you worked as a team. 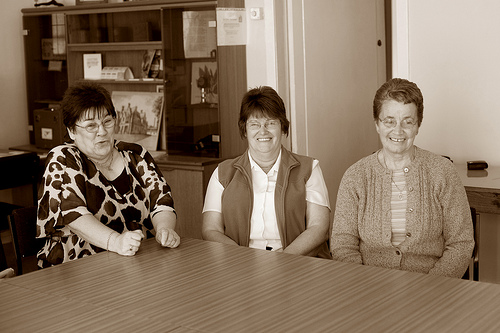